So, besides being caught up in all the broadcasters and Twitch hittin’ up PAX South, some minor tweaks were made recently that add a bit more perk in your chatting step. Curious about an emote in chat that catches your eye? Been a dedicated subscriber to a channel and want to shout how long you have been loyal at the top of the virtual chat roof? You are in luck! Twitch has provided such means to do so!

The first update is a simple, but smart one: an Emoticon Identifier! How does it work? Just hover your mouse cursor over an emote and the text command of said emote should pop up. Yeah, it’s nothing new in the world of the internet, but the addition is nice, and its hidden functionality is darn clever.

There are masses of viewers that subscribe to channels just for the kickass emotes, even if they do not (frequently) watch said channel or broadcaster. So, viewers using subscriber emotes while in other channel chats offer a bit more exposure for the broadcaster(s). Well, that’s how we are spinning it, and we are sticking to it.

Example of the Emote IDer in action. Hover over the icon and watch as the emote is exposed! Image provided by Twitch.

The next update is a subscriber notification that indicates how long you have been a subscriber for said channel and can be shared in chat when your subscription is renewed. This notification is only available when you and the broadcaster are online in chat, so no worries about chat being flooded with share prompts.

Remember that virtual roof you wanted to shout upon before? Here it is! Let’s be honest. Most of us are overly giddy to see our user names pop up when we follow and/or subscribe to a channel. So, adding a feature to display our stripes among the sub-club of the channel is another touch to satisfy our inner awesomeness for being loyal. 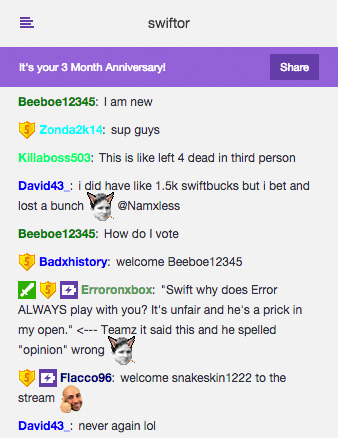 When resubscribing, a notification will pop up with the option of sharing your sub-streak with chat. Image provided by Twitch.

Our love for your channel may never run out, but our subscriptions might. If that’s the case, then fear not! You have 14 days to renew after your subscription status ends to keep your streak going. We know, we know. It’s a feature that most will not care about, but for those that do, it’s there. More info, HERE.

These updates touch up on the little things, and on occasion, it is the little things that matter. Kudos, to you, Twitch. I don’t think I need to say that these updates warrant a seal of approval from us, but since it’s kind of a thing here… Oh, whatever. Twitch Fan approved, Kappa!