Top 10 Features We Want In The Bloodborne Series

Bloodborne’s release in February is coming closer with each passing day, and the since it is a Souls game at heart, here’s a list of the top 10 things we would like to see featured if Bloodborne becomes a full-fledged series. Let’s fat-roll right into it!

Do you recall the character creation of the Souls series of the past? Well if you can’t, the body types you could pick were slim, literally and figuratively. In Bloodborne, we’re hoping for a bit more control on how our characters look.

We’re talking about being able to customize how wide your shoulders are, weight, and the like. It’s fine to keep presets but please, oh please, let there be a slider for the shoulders. A small complaint but we don’t want to be stuck with having wide-shouldered Femme Fatales!

It’s always been odd how some of us spend a lot of time into creating our character’s face, then play the game and wear a helmet over it. There are some games out there that offer a feature to hide your currently equipped headgear so you can see your character’s face and retain all the benefits of the armor. We’d like to see this feature implemented so we can slay monsters while still looking fabulous!

No. I’m not talking about the Fallout 3 or Ninja Gaiden kill cams. Just something simple when you riposte or backstab a foe like in the original Dark Souls. Making it an option would be a huge plus, that way for those that become nauseous after their 500th kill can simply turn off the feature in the options menu. Win-Win.

Requesting a repost? How about a riposte instead!

We can roll, block, and now side-step in Bloodborne, but you know what’s been missing? Throws. Enemies and bosses in the past have been able to grab and toss us around yet, for someone that can wield dual-wield ultra greatswords we can’t grab a scraggly dude in a tattered loin cloth to save our lives.

There can be restrictions made on certain enemies that can’t be grabbed and tossed but, if the target is roughly our size (or less) we want to be able to snatch the sucker and send him flying off a cliff or into a pool of lava!

Bloodborne doesn’t seem like it’s changing the way much in terms of how co-op has always been in the Souls series, so we’d like to see a feature implemented to where peeps on your friends list takes priority when laying down your summon with the Bell of Dream Summoning or Small Bell of Resonating.

Besides, it’s awkward when you are summoned by someone else that is not your friend. “Sorry, I’m trying to play with someone else. I know you want to co-op this place, and boss, and stuff but, like, yeah… Later!”

As the protagonist you are always silent minus a few grunts and horrifying screams of death. So, how about an option to have a voice? The dialogue of NPCs won’t have to change, just toss the option to allow your character to have a voice or remain silent.

Yeah, I know. That means FromSoftware needs to hire voice actors and even if they do, the voice acting might be terrible. Thus, have it as an option.

Yeah, there already is co-op in the campaign. In fact, you can summon up to three other players to four-man the whole thing if you wanted to, but that’s not what I’m talking about. I’m speaking of a straight-up co-op campaign that lowers the number down to having two-players, restrict summoning other players, and adding in something demented such as sharing your pool of currency.

In Bloodborne, it’s all about gaining blood (souls equivalent of the Souls series), so how about a twist where the dedicated co-op team has to share and lose them upon death? Yeah, that’s pretty cray-cray.

Besides starting out with different equipment and stat points allocations, we’d like to see each class have something unique about them. In the Souls series, your class never had an impact on the way you played, especially at the end of the game. Hopefully, this changes in Bloodborne so when we choose a class, it carries a trait, feature, or ability with it that sticks and makes it unique.

Classes only mattered if you wanted a certain set of equipment to start with. After that it didn’t matter.

There’s always something about starting a New Game+ in the past souls series that has always urked me: item progression. Since you carry over all of your equipment to the next playthrough, I understand upping enemy health, damage, and defenses, but how about boosting item progression as well?

I’m talking about giving the player the ability to upgrade items beyond a +5 or +10 with each NG+ scaling. In the past Souls series, scaling was increased only twice: once on NG+ and once again on NG+6. For every time the game scales, introduce new upgrade materials and items so we can add another +5 to our equipment.

Yeah, PVP would be completely thrown off, but outside of organized groups and sanctioned matches, PVP in the Souls series was never on even playing fields when it came to invading and being invaded. I expect the same to follow suit in Bloodborne.

There are some hardcore Souls players out there and there are games that aren’t even known for being difficult that offer such a difficulty. So, why hasn’t the Souls series ? Well, trial-and-error is what the Souls series revolves around and that is going to (most likely) translate into Bloodborne. 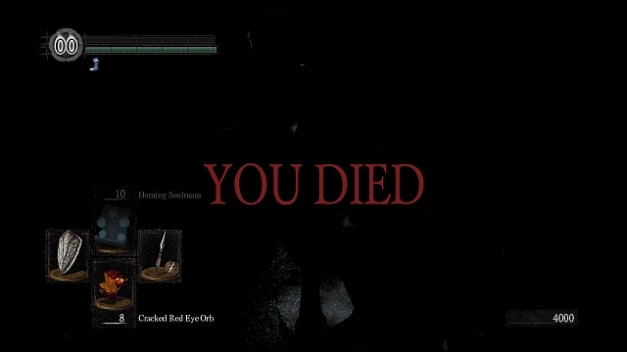 Maybe it’s my inner masochist but I’m crossing fingers for a perma-death mode in Bloodborne.

Let’s face it though, there are players out there that have played any of the Souls games so many times that they know what to do, when to do it, and where everything is. These individuals have completed Souls titles without dying, so why not have add a difficulty mode in it for the other players to “Git Gud” as well? Add an actual repercussion of dying by having you stay dead. Prepare To NOT Die.